Beyond YouTube: Why MCNs are Looking to Other Video Platforms for New Opportunities

Beyond YouTube: Why MCNs are Looking to Other Video Platforms for New Opportunities

Beyond YouTube: Why MCNs are Looking to Other Video Platforms for New Opportunities
Visit Tubular LinkedIn

For many years Multichannel Networks, or MCNs, have provided a financial and administrative bridge between content creators on YouTube, and the video platform itself. But now, those networks are looking for opportunities beyond YouTube, particularly when it comes to monetizing branded video content, a strategy that not only benefits the network, and its stable of creators, but the brands they work with, and the platforms they publish to.

According to a new eMarketer report, “Multichannel Networks and Digital-First Video Content: Growing Audiences Beyond the YouTube Core”, MCNs are breaking new ground in a bid to support their content partners  with production, and promotion, on other online video platforms, in return for a slice of the revenue earned by that distribution process. So who are the main networks, and how are they expanding their reach across the online video ecosystem?

Which multichannel networks are pulling in the big YouTube views via their creators? Tubular confirmed the top 10 YouTube MCN’s in June 2015, in terms of total views on the site.

Maker, whose content partners include gaming megastars PewdiePie (38.6 million subscribers), and Markiplier (8.9 million subscribers), generated 6.2 billion views in the 30 days of June, making it the top MCN on YouTube for total views. Maker was acquired by Disney in March 2014, for $500 million, plus an additional $450 million if Maker met certain performance criteria. If one metric was views generated, then it looks like it may be on track for that bonus.

Fullscreen, BroadbandTV, and Machinima take the next three places with a combined view count of just under 11 billion. Like Maker, Fullscreen, The Collective (#7), and Stylehaul (#10) have also been the subjects of substantial investment by traditional media companies over the past year. Other big takeover deals include the Heart Corporation’s 25% share of AwesomenessTV from Dreamworks in 2013, acquired for $33 million.

It’s fair to say that the MCN business-model wouldn’t exist without YouTube, but so successful is online video for brands, marketers, heck, even the whole media world, that it was only going to be a matter of time before the networks looked further afield for more opportunities. Many MCNs are actively expanding into Facebook, Snapchat, Instagram, Twitter, and Vine, and some are even distancing themselves from the whole MCN/YouTube label. Earlier this year,  George Strompolos, CEO of Fullscreen, confirmed that the MCN’s vision for the future reached way beyond YouTube:

“When we started, YouTube was the only thing that mattered. Anyone can see there is almost a new platform every week that catches on fast with young people. So we want to build a world around our creators, with platforms almost acting like solar systems.”

As new video platforms like Snapchat, and Periscope, change the way we watch content, MCNs, driven by the need to be as visible on as many channels as possible, are revising their digital strategies to stay ahead of the game. It’s no wonder that the more traditional broadcasting brands are snapping up these networks in a bid to reach the audience that is walking away from the TV, with their tablets and smartphones in their hands, watching what they want, when they want

Although many of the major MCNs have either been acquired by, or partnered up with bigger media companies with deeper pockets, the networks still have a very active income stream via the monetization of the content they promote on behalf of their creators. This includes standard pre-roll, and other video advertising, as well as from sponsorships, endorsements, and collaborations with brands to produce, and distribute branded video content. 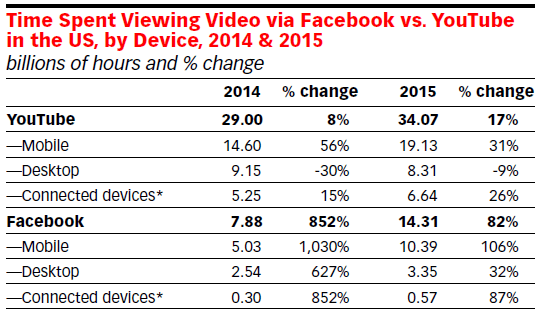 As consumers grow ever more media-savvy, and tolerate but not necessarily engage with video advertising, it’s the branded content strategy that is going to give the networks the opportunity to expand out on other video platforms. This is particularly important on sites like Facebook, and Instagram that don’t have the infrastructure to support pre-roll advertising.

According to comScore, time spent by U.S. users watching videos on Facebook is predicted to grow by an incredible 82% cross all platforms, but mobile viewing is set to skyrocket with 106% growth. With that kind of increase, coupled with the video views that Facebook is currently attracting, it’s no wonder that the multichannel networks are grabbing the opportunity to capitalize on the interest in video platforms outside of YouTube.

Want to know more about MCNs and the state of the digital video industry? Pro members of eMarketer can download the full report here.