The French are known for their impeccable food — as well as some epic social video food content. Let’s dive in! 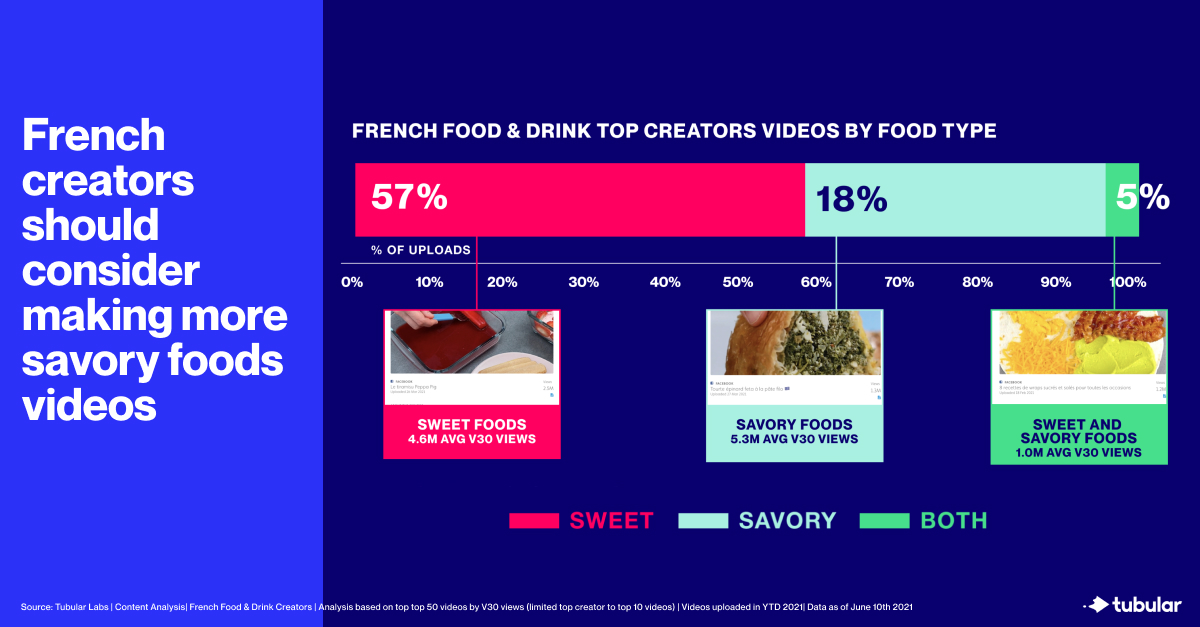 French food creators focus mainly on sugary, gooey, delicious sweets, but that might not be the best approach…

Our research shows that savory foods are getting much higher V30 (views in the first 30 days).

Whether you’re a food creator, game publisher, or digital outlet, identifying growth potential is the key to standing out in a competitive social video space.

More room for growth: Personal Chef Demonstrations stand out and provide more bang for your buck than popular “hand-in-pan” cooking videos.
Find out more Tubular insights just like this here.

Some of YouTube’s weekly Major League Baseball broadcasts get bigger audiences than others, and one possible factor is star power.

Shohei Ohtani is the Los Angeles Angels’ international golden boy who has made a name for himself as a pitcher & designated hitter.  2/3 most viewed games on YouTube involved the Angels, according to data we provided to Variety.

Divisional Rivalries also generated smaller audiences as 4 of the top 6 games through June 18 were interdivisional.

The pandemic scuttled numerous big-budget movie releases in 2020, but one of the biggest was Black Widow — the 24th movie in the Marvel Cinematic Universe. Rather than go straight to streaming (like many other titles did), parent company Disney had a different plan for ScarJo.

Disney believed in the film so much so that they delayed its release 14 months before a dual Disney+ Premium Access / Box Office release this weekend.

Anticipation has been palpable among fans, with over 3,400 Youtube videos created about Black Widow since June 1! Many came from Marvel and other Disney-owned creators. Our data shows Marvel’s U.S. YouTube account picked up 22.5 million views on 31 Black Widow uploads in that timeframe.

Kimmel found numerous ways to push (the fellow Disney-owned) movie via interviews with its stars like Florence Pugh and Rachel Weisz.

Check back next week for more insights to up your social strategy.